Wake up to God… with St Joseph

It has been said that if St Joseph were nominated for an Oscar, he would most likely pick up one from the category of best supporting actor! Joseph is one of those dependable characters who works away silently in the background. A man ‘who goes unnoticed, a daily, discreet and hidden presence – an intercessor, a support and a guide in times of trouble. St Joseph reminds us that those who appear hidden or in the shadows can play an incomparable role in the history of salvation.’ Pope Francis continues in his letter Patris Corde (With a Father’s Heart) to narrate how St Joseph ‘set aside his own ideas in order to accept the course of events and, mysterious as they seemed, to embrace them, take responsibility for them and make them part of his own history.’ He concludes, unless we, like Joseph, learn to imitate this way of surrender to God, ‘we will be unable to take a single step forward, for we will always remain hostage to our expectations and disappointments that follow.’ 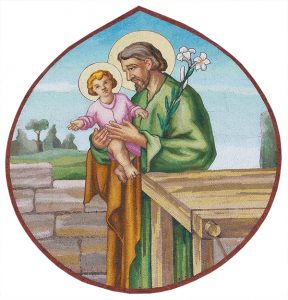 This does not mean, however, that this surrender to God is easy. St Joseph has to wrestle with God’s plan for him. How many nights must sleep have evaded him as he wrestled and struggled with the news of Mary’s pregnancy, her silence and her reliance solely on God to communicate the truth. He was not the father of her child. This he knew with absolute certainty. And yet, being a man of honour, he wanted to spare her the ignominy of being condemned publicly and stoned to death for adultery. We cannot begin to comprehend the suffering he went through. The thought of Mary’s betrayal or deception must have seared his soul like a branding red-hot iron.

It is not until he is given new information, by the angel in his dream, that he can see things differently. At this point, he is unaware that the deluge of afflictive thoughts, evoked by her apparent infidelity, are actually not based on the truth. Surely, we can relate to Joseph here. Have we not found ourselves in similar situations where we have agonized over things, only to discover later, that we had not seen the full picture because we did not have the full information at that time? Like Joseph, we can find ourselves wrestling with demons that are of our own making. How many times have you and I caused ourselves unnecessary suffering by dwelling on thoughts that were only half-truths or not true at all? Our interpretations, without all tthe facts, can cause us considerable pain as we turn over in our minds the various possibilities. Ironically, Joseph has to learn that his thoughts are an illusion. He has to learn instead to rely on the truth which is unveiled in his dreams.

After so many nights of turmoil, he eventually falls into a deep slumber. His mind which has been a beehive of activity is now silenced with sleep. Offering less resistance, “the still small voice” of God (1Kgs. 19:12) is able to break through in his dream and wake him up to the Father’s plan. Mary’s trust in God has not gone unrewarded. As in her own annunciation, the angelic messenger announces to Joseph the truth about her pregnancy in his dream. Joseph woke up from his dream (Mt. 1:24) and everything had changed. Why? He woke up to God’s plan.

Being a man of integrity, he makes a new decision not simply based on good reasons, but on a tremendous act of faith, in response to God’s plan. The course of action that lies ahead of him has become clear. He has listened to the voice of God in his dream. Like Mary, he gives his ‘yes’ to God’s plan, surrendering to the will of God. After the birth of Jesus, Joseph is warned in a dream to flee into Egypt for safety. He has learnt to listen to the strange ways of God in his dreams. When he arose from his sleep, he took the child and his mother during the night and left for Egypt. (Mt. 2:14). Later, it will be through listening to another dream that he will discern the opportune moment to return to Nazareth. 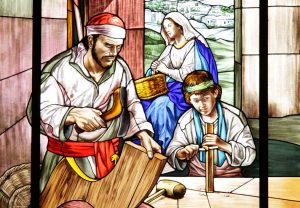 What are you and I being asked to wake up to?

Dreams have been explained as ‘the royal road to the unconscious’ (Freud). However, much earlier than the discipline of psychology, dreams were already presented in the Bible as the privileged arena of God’s voice. We have only to think of the son who wears the coat of many colours, Joseph’s namesake. His dreams evoke the envy of his brothers, who sell him into slavery and yet, he becomes the one who saves them from famine. Think also of his father, the patriarch, Jacob, who steals his brother’s inheritance and has to flee into exile. In this new land, bereft of family and security, feeling totally alone he settles down to sleep using a rock as a pillow. God breaks in through the dream assuring him of his Presence. He awakes from his sleep to discover “God was in this place and I did not know it!” (Gen. 28:16). His narrow understanding of God, as confined to his homeland, is expanded to embrace foreign territories where God journeys with him. He makes a vow: “If God will be with me and will watch over me on this journey I am taking and will give me food to eat and clothes to wear so that I return safely to my father’s household, then the Lord will be my God” (Gn. 28:20-21).

We could do worse than pay attention to our dreams and, maybe, learn from St Joseph to wake up to the Father’s plan for us. God has a dream and a plan for each of us: “Now I am revealing new things to you, things hidden and unknown to you, created just now, this very moment, of these things you have heard nothing until now, so that you cannot say, ‘Oh yes, I knew all this.’” (Is. 48:6-7).

St Joseph, guardian of God’s dream for us, pray for us!